The school was founded in 1874 as St. Paul’s University by Channing Moore Williams, an Episcopal Church missionary from the United States. Fire devoured the first school buildings in 1876, but with funding from the Domestic and Foreign Mission Society of the Protestant Episcopal Church (and in 1880 a new Principal, James McDonald Gardiner, to supervise), new three-story brick facilities with an imposing 60-foot spire were constructed in the Tsukiji Foreign Settlement. But, an earthquake in 1894 leveled many of the original school facilities, highlighting the perils of building on tsukiji [lit., “reclaimed land”]. The college was temporarily housed in Trinity Parish House but by 1896 new buildings, including an academic hall and student dormitory, were ready for occupation. In 1918, the university was moved to a new campus at Ikebukuro (see gallery below). In 1922, Rikkyo University became part of the Imperial University Order.

The tower of Rikkyo University rises above the foreign settlement at Tsukiji, c. 1900. 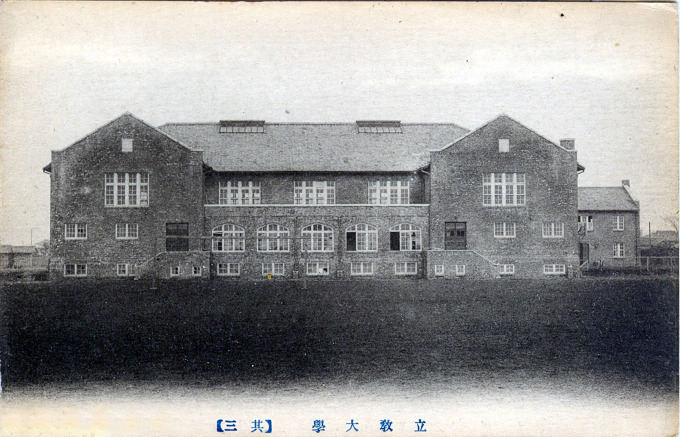 The Mather Library was built in 1918 (but will close Nov. 2013). Its collection contains over 1.7 million volumes of print and non-print materials, including the Protestant Episcopal Church collection and the ‘Edogawa Ranpo’ collection. Edogawa Ranpo (the pen name for Taro Hirai) was a Japanese author and critic who played a major role in the development of Japanese mystery fiction. was an admirer of Western mystery writers, and especially of Edgar Allan Poe. (His pen name is a rendering of Poe’s name.) In February 1945, Edogawa’s family was evacuated from their home in Ikebukuro, to Fukushima Prefecture in northern Japan. He remained there until June,  1945. Much of Ikebukuro was destroyed in the 1945 Allied firebombings of Tokyo but, miraculously, the thick, earthen-walled warehouse which Edogawa used as his studio was spared and still stands to this day beside the campus of Rikkyo University.