“[A] shallow sheet of water at the left of the main entrance to [Ueno] park contains an island with a pretty shrine dedicated to the Goddess Benten and a handsome granite bridge referred to by sentimental folks as the ‘moon gazing bridge’. In August, the water is almost hidden by splendid lotus blooms and on a moonlit night the scene is singularly lovely.

“Hundreds of wild fowl frequent the spot in winter and are a delight to the children who come hither to feed the big carp and goldfish with which the water is alive. The view of the shrine from the hill behind the Seiyoken Restaurant is very attractive, particularly when the reddening maples flame in contrast with the greensward.” 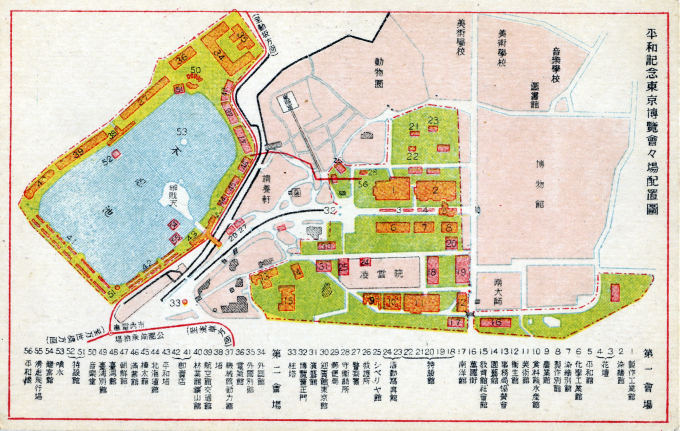 From the wiki: “The Shinobazu Pond is a pond within Ueno Park, and a historically prominent Shitamachi [Low city] feature often appearing in history and works of art. The park occupies the site of the former Kan’ei-ji, a temple closely associated with the Tokugawa shoguns, who had built it to guard Edo Castle against the northeast, a direction believed to be unlucky by traditional geomancy. The temple was destroyed during the Boshin War.

“At the pond’s center lies Benten Island on which stands the Bentendō temple dedicated to goddess Benzaiten. The pond’s shape until the beginning of the Meiji Era was very different from now, in particular the northern part where the Ueno Zoo is, which was much wider. In 1907 the Kangetsukyō Bridge was built toward the west in occasion of the 1907 Tokyo Industrial Exposition, making it possible to walk across the whole pond. In 1929 more work divided the pond in four distinct parts. The boat rental business, which continues to the present day, was started in 1939.”

“A short walk from the [Asakusa] Kannon temple toward the Shinobazu Pond one finds a small Inari shrine dedicated to the Rice Goddess. It is unmistakable because of the foxes wearing red bibs who are messengers of the deity, and the torii gate. On the feast day of the dead, Japanese fill thousands of little boats with food and messages intended for departed souls … A bit further toward the entrance to the Shinobazu Pond is the walkway leading to the Benten-jima Temple flanked on either side by concrete lanterns commonly seen on the approach to temples. It is believed on New Year’s Day, as one of the Seven Deities of Luck, Benten rides on the Takara-bune, or treasure ship, as it sails into port. A Santa of sorts, Benten on the treasure ship has magical gifts for people such as a hat of invisibility, a lucky raincoat, a sacred key, and an inexhaustible coin purse.”