“The kimono is the Japanese dress par excellence. It is a loose fitting garment, with wide sleeves, folded over in front so as to be double-breasted. It reaches the ankles and is generally worn unlined in summer, lined in spring and autumn, and wadded in winter.

“It may be either an outer garment or an undergarment, and is made of various materials and in various patterns. Besides the ordinary house kimono there are fine patterned, striped and spotted undress kimono used for out-door wear, traveling or going to the theater, etc.

“The crested garments for women’s use are of every imaginable variety in design; some called somoyo have designs all over from the shoulder to the sleeves and skirt, and others called susomoyo have a design running diagonally across the bottom of the skirt.

“The obi is a sash which holds the kimono together, as that garment is innocent of buttons or other means of fastening. A woman’s obi is about a 2 feet wide, folded double, and about 11 feet long, being wound round the waist two times and tied in a bow behind. The kimono and obi are two different things, but in use they are really one and inseparable. When we speak, therefore, ofthe kimono, we quite naturally include the obi in our thought.

“Tabi, made of cotton cloth or silk, are worn on the feet, those for women being invariably white and those of men generally very dark blue, except for formal occasions. They reach to the ankle. The Japanese tabi is generally split for the big toe, so as to allow thelatchet of the sandal or clo [geta] to be held between the big toe and the others.”

“The kimono is a Japanese traditional garment. The word ‘kimono’, which literally means a ‘thing to wear’ (ki ‘wear’ + mono ‘thing’), has come to denote these full-length robes.

“As the kimono has another name, gofuku (literally ‘clothes of Wu’), the earliest kimonos were heavily influenced by traditional Han Chinese clothing, known today as hanfu, through Japanese embassies to China which resulted in extensive Chinese culture adoptions by Japan, as early as the 5th century AD. It was during the 8th century, however, that Chinese fashions came into style among the Japanese, and the overlapping collar became particularly women’s fashion.

“During Japan’s Heian period (794–1192 AD), the kimono became increasingly stylized, though one still wore a half-apron, called a mo, over it. During the Muromachi age (1392–1573 AD), the Kosode, a single kimono formerly considered underwear, began to be worn without the hakama (trousers, divided skirt) over it, and thus began to be held closed by an obi ‘belt’. During the Edo period (1603–1867 AD), the sleeves began to grow in length, especially among unmarried women, and the obi became wider, with various styles of tying coming into fashion. 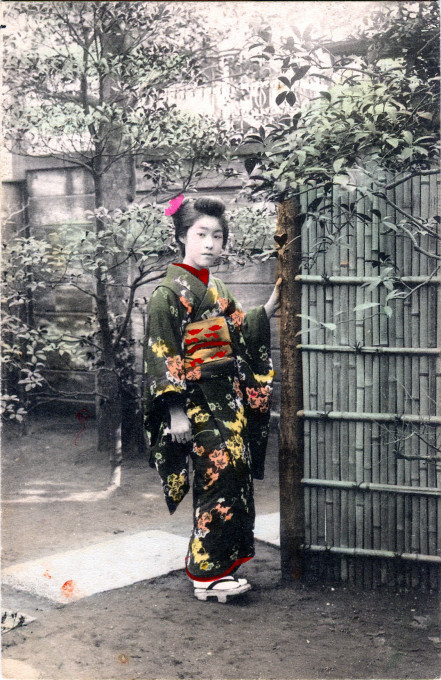 “The formal kimono was replaced by the more convenient Western clothes and yukata as everyday wear. After an edict by Emperor Meiji, police, railroad men and teachers moved to Western clothes. The Western clothes became the army and school uniform for boys.

“After the 1923 Great Kantō earthquake, kimono wearers often became victims of robbery because they could not run very fast due to the restricting nature of the kimono on the body and geta clogs. The Tokyo Women’s & Children’s Wear Manufacturers’ Association promoted Western clothes. Between 1920 and 1930 the sailor outfit replaced the undivided hakama in school uniforms for girls.

“The 1932 fire at Shirokiya‘s Nihonbashi store is said to have been the catalyst for the further decline in kimonos as everyday wear. Kimono-clad Japanese women did not wear panties and several women refused to jump into safety nets because they were ashamed of being seen from below.”