Aerial view of Ueno Park, during the Taisho Exhibition, 1914.

“The level that Japanese industrial technology had reached just prior to the outbreak of the First World War is reflected in the survey report of the industrial machinery products displayed in the 1914 Taisho Exhibition. The quantitative and qualitative levels of industrial technology can be used as a standard to measure the level of industry in a given period. At the 1914 Taisho Promotion Exhibition, a total of 5,717 machines were shown. Compared with the Tokyo Industrial Exhibition of 1907, it was clear that Japan had moved from ‘an age of imitation to one of creativity (Tokyo Fu 1976: 1818)’

“… Nevertheless, there were problem areas. For example, the domestic production of bicycles, relatively simple in construction and an integral part of people’s daily lives, had only begun in this period, including large-scale factories such as the Miyata factory and the Okamoto Brothers factory.”

“From 20 March to 31 July in Taisho 3 (1914), a major exhibition was held in Ueno Park in Tokyo. It was known as the Tokyo Taisho Exhibition. The national government had originally planned to stage an exhibition entitled the ‘Japan Exhibition’, but it was forced to cancel the proposal due to financial constraints. The Tokyo metropolitan government stepped into the breach, taking over administrative responsibility for the exhibition on behalf of the national government, and convening an avowedly urban exhibition to celebrate the enthronement of the Taisho emperor. This change in sponsorship symbolized the switch from the era of the national state (Meiji) to the era of the city (Taisho).” 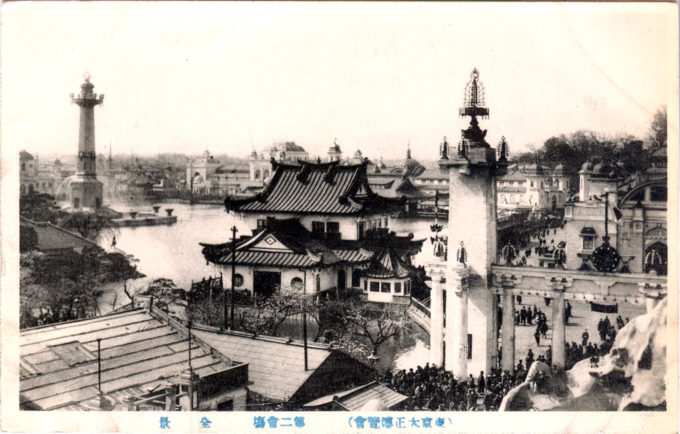 “In 1914, spectacle was not confined just to the adventurous traveller … the allure of the exotic and the opportunity of experiencing the many attractions of the islands were also accessible to Tokyoites who remained at home and to visitors in the capital. This occasion was provided through the Taisho Exhibition (Tokyo Taisho Hakurankai) held in Ueno Park between 20 March and 31 July 1914.

“The Taisho Period (1912-1926) was a mere fourteen years in length, but it was an age in which Japan transitioned from Meiji nationalism to Showa ultranationalism. It was also a time when Tokyo sustained the momentum of modernity generated from the Meiji Period and was on the verge of becoming internationally recognized as an industrialized and modern city. This image was galvanized at the Exhibition which was described in the event’s guidebook as having the purpose of ‘prompt[ing] industry progress and development’ and being:

A micro representation of a new Japanese civilzation (shin nihon bummei) demonstrating distinctly how and to what extent national industry has progressed and developed over the 60 years since the so-called opening of our country.

“There were over seven million visitors who were exposed to a wide range of pavilions and as a sign of Japan’s industrial progress Japan’s first escalator and cable car [and the gas stove/range] were in action at the event. Also on display was the power and reach of the Japanese Empire.”

– The Bonin Islanders, 1830 to the Present: Narrating Japanese Nationality, by David Chapman, 2016

Please support this site. Consider clicking an ad from time to time. Thank you!
+